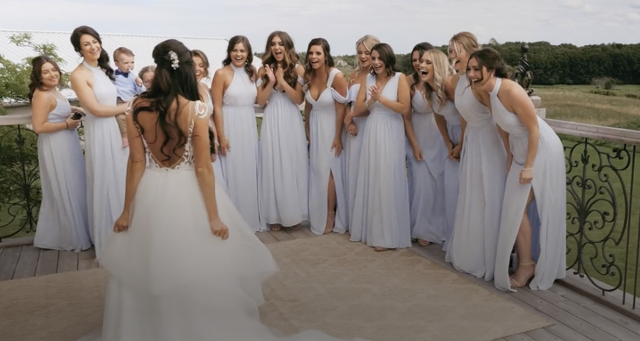 Here at Love Stories TV, our goal is to help every couple plan their dream day without stressing so much over every decision. In fact, our little secret? You should do exactly what you want to do as a couple—it’s your day!—no one else’s opinions matter. However, we know it’s easier said than done to not stress over a wedding so we’re sharing some of our best wedding planning tips with you.

Our Head of Editorial, Katie K, reviewed the top five bridesmaid gifts on Amazon. She shows you them in real life and gives her opinions and explanations on why she likes or dislikes them. Watch the video for all of Katie’s reviews below.

Hello everyone! My name’s Katie K and I am the Head of Editorial here Love Stories TV. Love Stories TV is the only video platform in the wedding industry. We have over 20,000 real wedding videos that are just waiting to inspire you and to give you ideas for your own wedding. Not only that but we have over 60,000 wedding professionals just waiting to work with you. In today's episode, I purchased the top-rated bridesmaids gifts on Amazon and I'm going to go through them all right here, for you.

By the way, are you doing a first look with your wedding party? It's literally one of my favorite moments that I see in weddings. People get so emotional, there are so many tears. Our social channels are full of them, so if you want to check them out afterward you can find us everywhere @lovestoriestv.

This first option of a number of bridesmaids gifts comes with a scrunchie, which I am a big fan of. I know it's trending right now or maybe we're on the tail end of the trend but I always have a scrunchie on hand so I'm definitely a big fan of scrunchies for a bridal party. This particular one came in either rose gold or light pink, I went with rose gold because my engagement ring is rose gold, so couldn't say no to that one. It also comes with a rose gold bangle that has a little knot, ya know, tie the knot, of course, so that’s cute! Keep in mind, this is Amazon so the jewelry is not going to be, you know, the most high-quality jewelry you'll ever find but hey, it's cute and budget-friendly! And then finally, honestly this might be my personal favorite part, but this pen with the little - how cute! I actually just got one of my friends these for her engagement gift or a "celebrate you're engaged" gift so, yeah, I'm a big fan of this. I think these are really cute, like I would actually totally get these for my bridesmaids like in their bridesmaid proposal gift. Probably not on the day of the wedding ‘cause I wouldn’t want them to like wear these at the wedding but yeah I would get these in like a bridesmaid proposal and they also come with these cute little cards that say “ I can’t tie the knot without you”, which is very fitting for the bangle. I mean hey you can't really tie the knot without your friends, right? Those people are there for you, they're going to help you go to the bathroom in that wedding dress, you need those friends there.

This bridesmaids gift, surprise to no one, is obviously a popular thing to get bridesmaids but it's again the knot, so you're tying the knot, so we have a necklace here and then little studs. Personally, I kind of think they look like pretzels, which is not a bad thing, if you have a pretzel cart as your late-night snack, um yeah those are perfect, go for it.

Look how pretty those are! I am a personal fan of doing similar things for friends but then if there are slight variations like again, there are different patterns, I like choosing the one I think fits each friend best so I think that's actually perfect for a bridesmaid gift. So this one’s like a pearly, pink—ooh that actually smells really good, kind of floral but also sweet. Ok lets do, ooh, this is like a dark green, moody, marble one. This would be a fun one for a fall wedding, or your Scorpio friend, it smells like lemon, ooh ok so they all smell different. This is lavender, perfect for your friend who may need a little bit of soothing, maybe this one's for you on your wedding day. I am a big fan of these, I think they're super cute. You can’t go wrong with candles like truly, I have a million candles in my home, all different sizes, from different events, yeah I don't think you can go wrong with these, they're cute.

These are makeup bags that say bridesmaid on them. They also have a maid of honor one, a bride, so you can match your girls, although the bride one doesn't have the little flowers, which I think is kind of the cutest part of the bag. And then a matron of honor, which maybe this is an unpopular opinion, but I hate that term, we're in the twenty-first century like we don't need to be called matrons anymore. Frankly, I am not a fan, ok - i'll just say it, I don't like them. But, I am a huge fan of giving your wedding party containers of some sort and if they're all female, yeah, I think a bag is a great way to go, a makeup bag. Especially if you stuff it with little goodies, like tweezers and a nail file and little lipsticks, like things they might need to touch up their look on the wedding day. I think that's so cute. I love that stuff. Another reason I don't like these is because they just have the, I mean again were back to the matron, just hate the matron thing. They just have the title and I don't think that's cute. I think you should personalize each bag for your friends, like have their name or at least have their initial on the bag. I think having just bridesmaid is not as cute. Now i do want to note one thing with all of these, they are kind of just assuming that you're going to have all bridesmaids. Here Love Stories TV, we are a big proponent of doing your wedding completely your way and if that means having a mixed-gender wedding party, yes - we say go for it! I'm actually having my brother in my wedding party so I will not have all bridesmaids, so I will be mixing it up for the gifts and such. I just wanted to note that.

The last review is a wine glass that says b**** please, you're obviously going to be my maid of honor. Uhh, yes, I would give this one to my maid of honor and how much fun would this be to drink out of on the morning of your wedding with some mimosas. Ok, so those were all the Amazon reviews but I did want to give one honorable mention and also mention that I actually was supposed to get robes and review those in this video but they never came, so you know there's another little maybe issue was getting things from Amazon. But it was just a normal satin robe, I totally think you should get your girls something to wear on the morning of, preferably something that either opens from the front like a robe or a flannel or, talking about a flannel, something that buttons, like a button-up shirt, or like cute PJs, something they can take on and off without messing up their hair and makeup. I just think it's really cute and it looks super cute in wedding photos. I know I don't have a matching set of PJs, I would love if one of my friends gave me a matching set of PJs.

Um hello, these Birdy Grey sunglasses! How cute! These are from Birdy Grey, one of our favorite bridesmaid dress brands. They have a ton of bach party accessories, like these glasses, I think even have floaties. If you're getting married you should definitely go check out their site ‘cause they have a ton of fun stuff like this.

Thanks so much for watching! If you liked that video, make sure to give us a thumbs up and please leave a comment below telling us the best bridesmaid gift you've ever seen - seriously the crazier the better, actually the cuter the better, I want to hear them! Make sure to subscribe to our channel for more wedding advice and visit lovestoriestv.com for ideas and inspiration for your wedding. Don't forget to follow us on Instagram, TikTok and everywhere else @lovestoriestv. See you next time!

*So there you have it—the five top-rated bridesmaid gifts from Amazon. We hope this is helpful and make sure to check out all the real wedding inspiration on lovestoriestv.com. Looking for bridal shower gifts? Or how about more general wedding party gifts? We've got you covered there too!

Get inspired by our collection of beautiful wedding videos